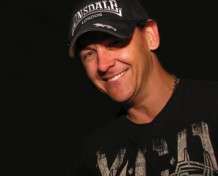 People still remember his renowned 8 hour sets at classic stomping ground DC’s in the early 90s and with close to 20 years club experience under his belt, Flex is an unstoppable force.

From witnessing narrow misses of falling disco balls to sharing spa baths with ‘love ‘em large’ ladies, Flex’s career has seen the rise and demise of clubs, genres and styles. While scenes change, Flex is a constant fixture on the Perth dance circuit and always remains fresh.

He’s had residencies at every top-notch dance venue in Perth, so it’s no surprise Flex is one of the powers behind Perth premier party purveyors Habitat. Since Habitat’s inception in 2004 they’ve hosted an almost endless number of international artists, like Trentemøller, Stacey Pullen and MANDY. Flex has also supported some of the best in the business from Plump DJs to the immortal Boy George.

His skills have seen him play across the globe in Europe, Dubai, South-East Asia, Japan and beyond. Get international quality at local prices. FLEX!