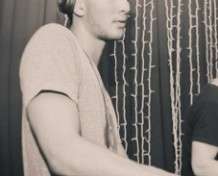 Although having DJ’d around the block for 5 years, JimiJ has never felt more at home anywhere in Perth than at Geisha.

“I love the club. The music, the people. Even when I’m not playing, I usually go there anyway as I know that the music will be consistently on point and the crowd rocking.”

Previously playing marathon 7-8 hour sets at a club whose name will not be mentioned, Jimi experimented with mixing different genres at a costly price.

“I would fall asleep after a night of playing for so long and be literally dreaming I was still DJing. I could see Serato in front of me and getting worried about the track running out, before waking up! Those nights were tough but they helped develop my diversity as a DJ. Playing a wide variety of house styles keeps things interesting for the crowd, and for me.”

On a more serious note, his own productions have started to find their way into some large hands. Hands belonging to Jaytech, Marcus Schossow and Armin Van Buuren – the latter of which played his track ‘Mea Culpa’ three times on his latest A State of Trance 600 tour around the world.

“When I got the email telling me he played it, it’s hard to describe. A bit of elation, excitement, checked the email again to see it wasn’t a mistake. It’s pretty crazy when someone like him plays something you created from the ground up!”

You probably won’t be able to check JimiJ mixing for 8 hours at Geisha…but we promise his sets will be shorter and just as sweet.