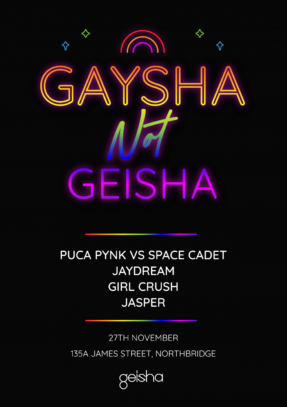 As November draws to a close, so does PrideFEST, so we gotta send it off with a BANG to celebrate our near dear and queer crew, and for one night we will be Gaysha, not Geisha.

House music and LGBTQ+ folk and history go hand in hand, and we’ve come so far in acceptance as a society, so here’s a little queer history for ya💁💁🏾‍♀️

House music was built on the backbone of the LGBTQ+ and POC community, born in Chicago in the late 70s. The genre name “house” derived from a nightclub called “The Warehouse” frequented by Black and Latino gay men, where Frankie Knuckles (the Godfather of House), would use reel-to-reel tape to create loops of his favourite disco tracks. As the anti-disco movement swept through the late 70s, rooted in anti-blackness, disco and house became a protest against the forces beginning to chip away at the right to exist for queer and black bodies🏠🏢

Over the decades, house music has grown and evolved into EDM, drum and bass, acid house, techno and dozens of other genres and subgenres. It created its own subcultures, and spread around the globe, inspiring a movement of dance, acceptance and freedom, but it all started with the queer people of colour who founded the genre, dancing their hearts out a grimy Chicago club💖💖💖

We’ll be showcasing some of our fave LGBTQ+ DJs, expect a night of tunes ranging from disco – to house – to techno. Come dressed in your brightest, and boldest, and show face in all your camp, glitter glory.

Geisha always has, and always will be a safe and inclusive space for any and all identities, and we have a zero tolerance policy on hatred or bigotry of any kind.

If you witness anything, or anyone makes you feel uncomfortable or unsafe, our staff and security are there to help!

Geisha bar and those associated would like to acknowledge the traditional owners of the land and pay respect to elders past, present and emerging. Sovereignty was never ceded, always was and always will be Aboriginal land.