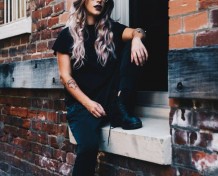 Raised in Germany where techno is life, Miss Holding clears the mind and reminds the soul of its eternal love for music. Drawing inspiration from a vast reach, her art is a pumping, passionate realm where her unique energy meets the spirit of euphoria: to take people into another world and to ensure euphoric celebration, that is the motto of Miss Holding.

Miss Holding’s love of music began early thanks to her prodigal musicality – she could play the piano by ear. In 2009 she was introduced to records and a record player, which infected her with electronic music from thereon. After a well-known Stuttgart DJ took her under wing, she began to unleash her power regularly at the event Frauensache in the Toy. Clubs like Finca, Stereo, Hype, Climax and Four Runners Club enveloped her sonic output. Whether techno, tech or deep house – with its natural and multifaceted nature, as well as its “pushing pushing” sets, this DJ from Stuttgart conquered the hearts of the electronic community.