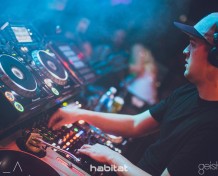 Originally hailing from Hobart in the Apple Isle, Justin Long aka Lids has always had an enormous passion for music and the magic that it plays in connecting people. Introduced to the club circuit from an early age, an utter fascination with the art of mixing two records was born.

The sheer thrill of crowd reactions to mixing music a particular way was addictive, and something that he would strive to perfect. Cutting his teeth into trance and breakbeat records at the start of his DJing tenure in 2007, his style has continued to evolve over the years with one thing remaining constant – passion for the music. With influences ranging from Tiesto (in his earlier years) through to Mark Knight, Above & Beyond, Hot Natured, Plump DJs and Pendulum.

Possessing the skills to precisely curate a set of diverse styles has seen him support a host of both international and national touring artists such as Ferry Corsten, Dash Berlin, Basement Jaxx, Wolfgang Gartner, Sinden, Doorly, Plump DJs, Stanton Warriors, Lady Waks, Krafty Kuts, 4 Strings and TJR to name a few. A finalist in the 2018 Habitat DJ competition saw him become part of the Emerge crew at Geisha, where his sets consist of a wide variety of the house music spectrum. From deep house to techno, a progressively flowing, measured and passionately delivery is what you can expect when he’s behind the decks.