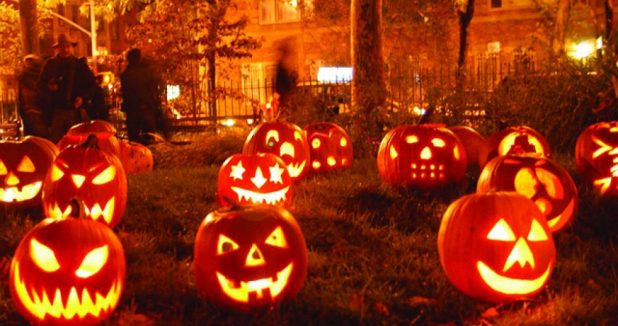 I have an obsession with horror movies, all.year.round.

So. as you can probably imagine, Halloween is my favourite time of the year. I cannot tell you how many horror movies I’ve watched over the years. Worryingly, I’m almost completely immune to any gore, jumps or supernatural scenes.
So in true Halloween style, I am going to countdown the top 10 horror movies of all time (in my true humble opinion- not like I’m any expert on the matter ? )

10-Crimson Peak: Edith is advised against marrying Sir Thomas Sharpe. After ignoring all words of advice and initial gut feelings, she moved into this castle where she learns her husbands secrets and all is not as it seems. This movie has a real Victorian feel to it- different from anything I’ve seen before- it deserves a spot in my top 10.

9-The Exorcism of Emily-Rose: A reverend that performs an exorcism on a girl believed to be possessed by demons, a follow up from the original- this is the updated/scarier version.

8- It follows: a supernatural psychological horror film, which follows a teenage girl after she is pursued by a supernatural entity. Basically, if you have the curse, someone will follow you and not stop until they kill you (this person cannot be seen by anyone else)- the only way you can pass this curse on, it to sleep with someone. Who thinks of this shit?

7-A quiet place: “If they hear you, they hunt you.” A family that in order to survive, must live in absolute silence. If they trip, or accidentally make any sound, these huge monsters appear from no where, resulting in instant death. This movie is terrifying and leaves you on the edge of your seat.

6-Wolf Creek: What brings this horror movie into 6th place is that it is actually factually based on three road trippers that undertaken an adventure to a location in remote Australia. Accepting help from a friendly local after their car broke down, they wake up gagged and tied in a shed. This thriller/horror focuses on their escape and the horrendous events that unfold. Both gripping and chilling- this is a must watch.

5- The Texas Chainsaw Massacre: One of the originals from the 1970’s. There were so many complaints about the level of violence within this movie, that it was banned in several countries. For a movie made so long ago, it is very advanced.

4-Hereditary: This movie addresses possession, demons, coven members, family secrets and religion. Both terrifying and confronting- it is one of the highest reviewed horror movies of all time.

3-Conjuring: Based in the 1970’s, two paranormal investigators are sent to the home of Carolyn and Roger. After recently moving into the house, paranormal activity has terrified the family. This film is full of exorcisms, demons and gets my votes for one of the best horror films of all time.

2- It: A clown that emerges from the sewer every 27 years to haunt the children of a small town called Derry. Based on the original by Stephen King, this movie has insane special effects and haunting scares. Im so glad I watched this one front row in the movies.

1- Coming in at number one “Dead Silence.” I first watched this in year 9, and I shit you not- I couldn’t sleep well for weeks. Ventriloquist dolls lead by an evil spirit that rips out peoples tongues if they scream. The movie has a sickening ending, plenty of jump scares and evil nursery rhymes. It has an ending that makes you feel genuinely sick to the stomach, I love it

Hope you have a scary one