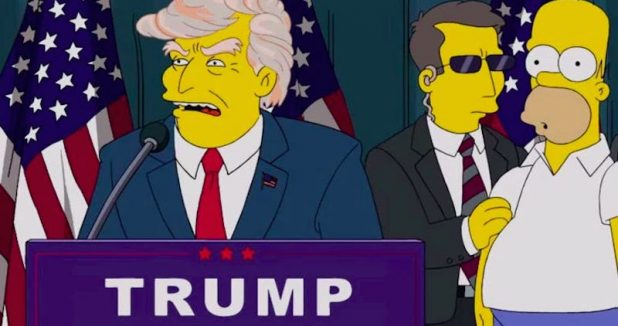 Recently, it has become news that many things that have occured in old Simpsons episodes have infact come true later down the track. Given that they’re around 639 Simpsons episodes, some of these ‘predictions’ are hardly surprising-although some are detailed and scaringly accurate. You be the judge.

1.Tiger Attack: An episode in 1993 presents Siegfried & Roy (a real life American-German magician/entertainer duo). During the episode, the duo are mauled by one of their trained white tigers during a performance at a Casino.10 years later, one of the trainers was injured by one of the white tigers, sustaining serious injuries- but living to tell the story. Realistically, can we be surprised when a wild animal that has been caged and taunted for years reacts and lashes out. Some say accident, others would say karma, Im staying out of this one lol.

2. Horsemeat Scandal: In a 1994 epsiode, the Lunchlady ‘Doris’ used assorted horse parts during her routine lunch at Springfield elementary. In 2003, the Food Safety Authority in Ireland found that over one-third of the beefburgers being produced contained horse DNA. Again, nothing more than a coincidence in my eyes. God knows what we are actually eating half the time.

3. Faults in the Voting Machine: In a 2008 episode, a clip shows Homer attempting to choose between Barack Obama and his Republican opposition John McCain. Homer is trying to choose Obama on the machine, however his vote continues to change to the opposition. In 2012, one voting machine in Pennsylvania had to be removed due to Obama’s vote being changed to his Republican rival. Now this, is spooky shit.

4. The Beatles: An episode in 1991 shows Ringo Star from the Beatles answering fan mail letters from decades prior. In 2013, a reply to a fan letter from Paul McCartney was found in a car boot sale by a Historian. The letter was over 50 years old. The fans were later given the letter, alongside a reply from Sir McCartney himself. I bet that was well worth the 50 year wait! Again, another interesting resemblance between an episode and a real life event.

5. Trump: In 2000 in an episode, Lisa looks into the future to a cabinet meeting, she offhandedly mentions “We inherit quite the budget crunch from President Trump.” Trump was then elected president in 2016. The week after the election, the chalkboard reads “being right, sucks.” Right?! Many people have found this the weirdest accurate future prediction on the Simpsons (as of yet).