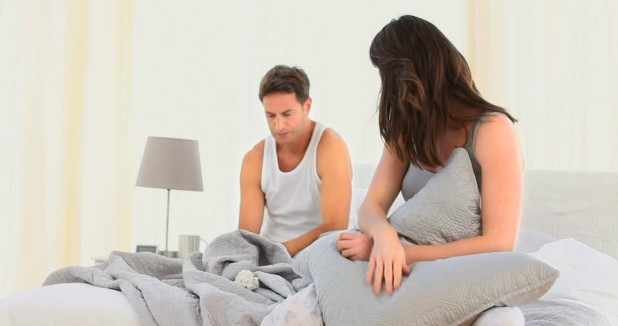 Fellas, would you lie to your lady about your size?

Ladies, would you marry a guy before even knowing what he’s packing?

Now I’m no size snob, but if I’m going to be honest, I really do have a minimum amount of dick that I consider necessary in order to have a relationship. And that’s not a harsh thing to say, I think it’s about as socially acceptable as a guy preferring to only date girls who have athletic body types, or a woman wanting to date a man taller than her. Because it’s something that literally affects your sex life, and I mean, if there’s no satisfying sex, you may as well be flatmates, right?

Well. A US woman married a man without having checked out his “situation” in advance (fucking hell, Christians) and was more than a little disappointed to find out AFTER THEY GOT MARRIED that he was packing a piccolo pecker. That is to say, a micropenis. According to website Healthline, a micropenis is a “stretched penile length of 9.32cm or less”, and is something that affects less than 0.6% of the population.

The woeful wife jumped onto Reddit’s “Am I an Asshole” thread and told fellow forumers about the disappointing surprise (using the username “throwaway_peen34”). She told the forum that she found out about the micropeen on their honeymoon, describing it as “around an inch and a quarter” (3.18cm).  SOMEHOW (how?) the husband found the post, and she updated the post later with the news that he was going to leave her and sue her for defamation of character. (Say whaaaat? I’m still confused as to how he discovered the post).

He is now saying that he wants to spend $50K on penis enlargement surgery, insisting that they take out a second mortgage to do so. The wife, understandably does not want to comply, telling Redditors, “it’s not ok to take out a second mortgage so he can get phalloplasty (enlargement surgery)? He scheduled a free consultation w/ a plastic surgeon, but told me it’s probably going to cost at least 50k […] I’m absolutely heartbroken that our relationship was just destroyed in a matter of two weeks. By a micropenis, nonetheless […] I’ve told him I don’t need a $50K penis, and that we can manage to keep things spicy. But this stubborn man is bound and determined. I think he thinks this will save our relationship, but him being reckless with finances will ruin it instead.”

Moral of the story?

DON’T GET MARRIED UNLESS YOU’VE SEEN THEIR JUNK, KIDS!