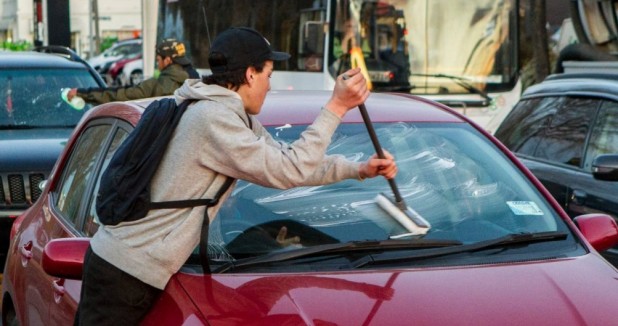 Something I’ve noticed over the past five years is a steady increase in the amount of young (and old) entrepreneurs, the ones who have built themselves well-known, household name businesses, where they work for themselves, no bosses, no overheads, no 9-5, as many breaks as they want, work wherever they like, and UNLIMITED EARNING POTENTIAL!

No, I’m not talking about Isagenix or whatever pyramid scheme (sorry, mUlTi LeVeL mArKeTiNg) is doing the rounds these days ….

I’m talking about the great unwashed fleet of windscreen washers. The frustrating people that insist on washing your windscreen at traffic lights, usually making your windscreen even dirtier than it was to begin with. When I first encountered one of these, I naively thought “oh ok maybe it’s some German backpacker that needs work to see out his last couple of weeks in the country” (he DID look rather German). But I saw the same guy again, about 2 years later, at the same intersection. This time he had a gang of unkempt people with him, including an old weathered looking guy who didn’t seem to realise that the magic of a squeegee is contained entirely within the rubber. He was using a squeegee that was missing the rubber, and as a result, was scratching windows. Thankfully, I realised fast and offered him a $5 note NOT to touch my car.

Lately I’ve heard just how much these people make, and it infuriates me – they are making up to $400 a day on a good day! All tax free, whilst presumably collecting Centrelink at the same time. Yeah okay, I’m sure there are the odd backpacker or schoolkid trying to earn an “honest living”, but the majority of these people are taking your money, both out of your paycheck (I’m fine with social welfare so this is ok) and out of your wallet (no I’m sorry you’ve already had my money, this is not cool). And if you tell them you don’t want your windscreen cleaned, they can get pretty pissed off.

Following retaliations I’ve heard about from being told “no” or not being paid after being told “no” but doing it anyway:
Kicking cars, scratching cars with belt buckles, opening the door and attempting to steal handbags, trying to get into the backseat (thankfully there was a protective dog), squirting the dishwashing liquid they use all over the other windows to limit your visibility.
So as a result, many people I know have turned to the following offensive defensives:
Turning the water spray nozzles to the side so that when you flip on your window washer it jets out to the side and hits them, turning on window wipers to stop them being able to do anything, honking the horn for extended time, revving a really loud car, staying WAY back at intersections (annoys other motorists but keeps you sane), or driving forward at them to scare them off.

None of the above should be needed though, because this behaviour is ILLEGAL. It’s illegal to be running around intersections soliciting services for under the table money. So why are they permitted to be out there doing it? And what’s more, why the fuck are they getting more money than an honest employee who pays tax? Look, I get it, alcohol and ciggies don’t grow on trees. But the rest of us pay with legal income, so they should too.
Maybe I should throw out my uni degree and go join them, if that’s how society is going.