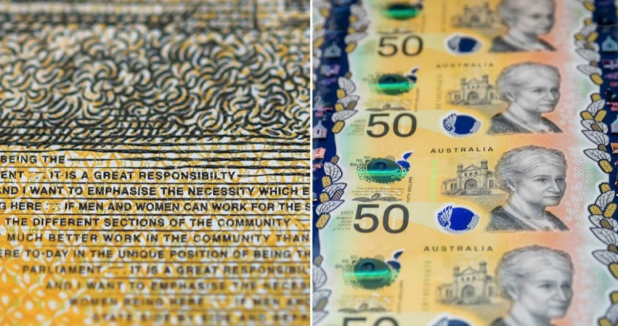 Hilariously, the Australian Reserve Bank is hiding shamefaced from the public for awhile, after a patriotic (and detail oriented, obviously!) ‘Strayan sent Triple M a photo of the new $50 note, released in October last year.

The word “responsibility” was missing the third i, instead being spelled “responsibility”. Awks. The words were part of Edith Cowan’s first parliamentary speech, and the word is misspelled in all three places where it appears on the note.

Now. The Australian Reserve Bank is a pretty rich bunch of people. You’d think, YOU’D THINK, that they could afford to hire a vast team to be proofreading shit like this. Like, not just one proofreader, but several backups for them?

After their attention was drawn to the mistake, which affected approximately 46 million $50 notes that are now in circulation, the Reserve Bank promised to fix the spelling on the next printed set of the $50 notes.

I know I’m definitely going to keep my eye out for it, and should I come across it, I’ll be hanging onto it and framing it over my desk as a hilarious reminder to ALWAYS triple check my work!