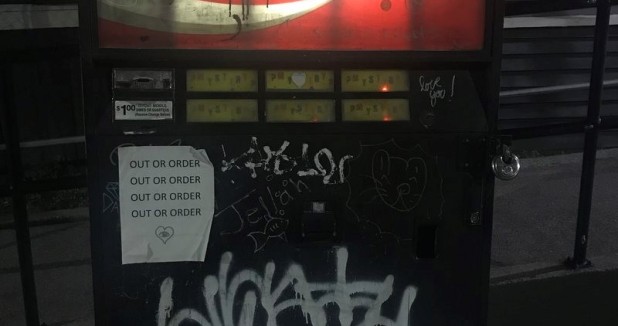 I feel like I’m always the last to know these things, but I just learned that there has been a mystery ancient Coke vending machine in Seattle for years that dispenses cans of fizzy, but YOU DON’T KNOW WHAT YOU ARE GETTING.

What’s more, is that most of the cans of fizzy that the machine dispenses are really rare, or sodas that have been discontinued for decades. Like, what the actual fuck. For example, people have been known to have score soda that hasn’t existed or been popular since the 1980s, like Lemon-Lime Slice and Pepsi AM, or obscure drinks like Diet Hubba Bubba Bubblegum Soda and even bacon infused Coca Cola… There are rumours that people have also gotten cans of New Coke and Crystal Pepsi from the machine.

They are all either Coke or Pepsi brand options, so it’s hard to pinpoint it as a prank by one of those companies. Nobody knows who refills it, but every time it breaks down it is usually fixed within a few days, and it always gets restocked.

Sadly, the machine disappeared in May 2018 after breaking, and has yet to return – leaving behind a note that simply said “went for a walk.”

Will the mystery machine return to mankind? Or has the machine been lost in time forevermore?