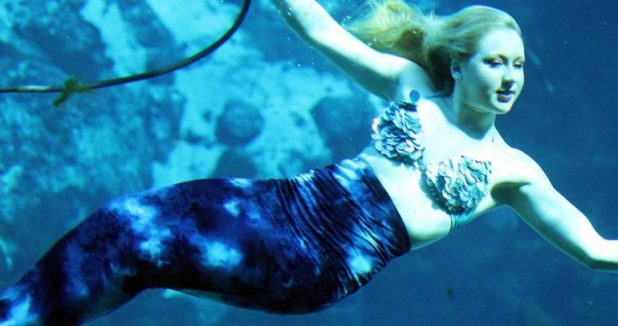 Whenever I watch a movie where someone has to hold their breath in a life-or-death scenario, I always try to hold mine with them – and I always fail after like 50 seconds. Let’s just say that if we are ever in a scenario where we have to swim through a big corridor to get to safety in the event of a tsunami, then I’ll be dead. But the human ability to hold one’s breath for long periods of time fascinates the shit out of me. Free divers in particular are just incredible. Real-life mermaids that perform in tanks for people – epic.
The record for static apnea, also known as “holding your breath for fun”, currently stands at a casual 11 minutes 54 seconds, and is held by Serbian Branko Petrović, who is also a suspected seahorse on his days off. Static apnea does not allow for the use of oxygen in preparation, whereas the Guinness World Record for breath holding does – which is why that particular record is a whopping 24 minutes and 3 seconds, held by Spaniard Aleix Segura.
It’s often assumed that the ability to hold our breath, along with our hairlessness and subcutaneous fat, is a throwback to an aquatic phase of development, but the “aquatic ape” origin idea doesn’t hold much evidence. However, we do have the “mammalian dive reflex”, which is triggered by cold water touching your face – and responds by lowering your heart rate, which is why breath holding is far more successful in water.
Magician David Blaine, who broke the Guinness World Record back in 2008, described his rigorous preparation for the stunt in a TEDMED talk (one that started me on a rabbit hole into TED talks for about 4 hours). He had to drop 30lb of body weight to eliminate body fat and get his resting heart rate as low as possible, while training every day to hold his breath. He spent 48 minutes out of 55 holding his breath every morning, by alternating one minute of purging with 5.5 minutes of breath holding. Purging is pretty much just hyperventilating to remove as much CO2 from your body as possible. When you hold your breath, the CO2 that you would otherwise be exhaling instead accumulates and makes your blood acidic, which is why we get to that break point where we feel like our lungs will burst if we don’t breathe.
Blaine refrained from eating before the attempt, to slow down his metabolism, and he managed to get his resting heart rate down to an incredible 38 bpm, dropping it as low as 12 bpm while holding his breath. He also slept in a hypoxic tent every night, which simulates an altitude of 15, 000 feet (pretty much Everest base camp) in order to build red blood cells in the body to assist in carrying oxygen further. All of this, combined with breathing pure oxygen before the feat, was what won him his record on Oprah, and he now probably lives underwater somewhere, thankful that he never got brain damage from his feat.
Will I ever delve into the fascinating sport of static apnea?
I wouldn’t hold your breath.
Love, Akika xoxoxoxoxoxoxoxooxoxox